Where did the name Pony Gold come from?

When I started sharing my work online, I wanted to give myself a name that people could remember or pronounce or share with someone else easily – people often get a bit beguiled by all the consonants in my surname! And at that time I had this thing about the palomino horses that were stabled nearby, ‘gold ponies’. Then I kinda liked the idea of Pony Gold as almost a fools’ gold or something trivial and sweet against something precious and serious, which I hope is what translates in my work.

Theres a strong Australiana theme to your work, tell us a bit about that and what else inspires your work?

I grew up rambling in the bush and coastlines around the NSW mid-north coast, so my whole world was built of those everyday wild things… the strange plants and animals, the open, wild, ancient spaces, and very much the magic that is happening all the time, sometimes unwitnessed. I’m just obsessed with that balance of power and vulnerability, and that overwhelming sense of wonder. Another big influence was is American literature and music and poster art from the 60s and 70s, that really passionate, earnest and creative time when change was really happening. And then there’s my dad who is very DIY but also a craftsman (wood and leatherwork), he taught me a lot about process and patience, and instilled this kinda unquestioning attitude of “Yeah, I can probably make that thing myself”.

What is your process when you create?

I keep a lot of messy records, indecipherable sketches, words and scribblings. I imagine a lot before (and maybe during?) sleep, planning out ideas and thinking of ways to dismantle and reconstruct things to make them a bit different, to keep pushing my favourite touchstones. I’m becoming a little more patient with the process as I get older, spending some time with each idea and letting it expand and develop more fully before moving on to the next whim. I think the heart of the process is just considering different ways to communicate a feeling: it’s trial and error with what resonates.

Looks like you love to travel! What place has been the most inspiring for your work?

I think any wild part of Australia is the most powerful influence for me: everything about it is so expansive and open, so ancient and dangerous, but also totally familiar and comforting.

Japan had a big impact too, for quite similar reasons: this super sophisticated, gentle culture is leaning up against the absolute ferocity of nature, and the intensity of the landscape once you get out of the cities there. I love that balance and contrast.

Where are you based now?

I recently relocated from Melbourne to Utungun, which is a little farming community on the mid-north coast of NSW where I grew up. It’s a tiny paradise; every morning I watch the sun rise and am just blown away by its beauty. 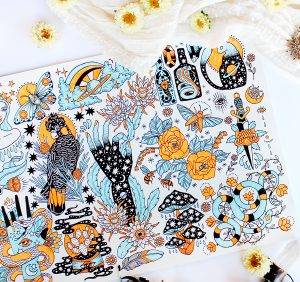 When did you realise you could make a career out of your artwork?

I think I realised it a few years ago, but realising it and actually making the jump are two different things! I knew that I was capable of consistently picking up and creating quality work, but I’ve always found the financial side really daunting and uncomfortable, as I know a lot of creatives do.

When did you decide to make the move to becoming a full time freelancer?

I’ve only recently started freelancing full time again this year. I attempted to work freelance for a while a few years ago and, as I mentioned above, just really struggled with the business side of things. But, like all misadventures, I learned a lot from it, and I’m definitely a lot wiser in my business practices now!

Whats been your favourite brief so far?

My favourite project so far is still under wraps until later this year, so I’m not allowed to reveal that one yet! But my favourite project that I can actually talk about was probably the first commercial job I worked on with Somedays Lovin’ back in 2012 (I think!). I had no idea what I was doing but just wanted to make the most beautiful thing I could… and that artwork is still one of my favourite pieces I’ve ever produced. 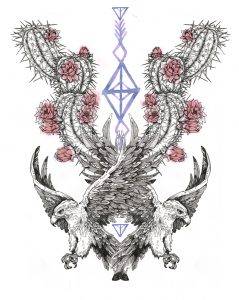 What are you working on at the moment?

Mostly logo designs and T-shirt graphics on the commercial side, and I’m trying to make decent time for personal work too — always thinking about new prints and little treasures for people to carry with them.

Whats next for you?

I’m hoping that the new location and the full-time freelancing will help my work to develop and evolve — I love being able to commit more energy to creating than ever before! And hopefully just capturing and recording more strange and beautiful magic. 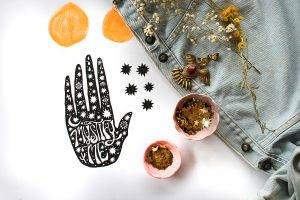 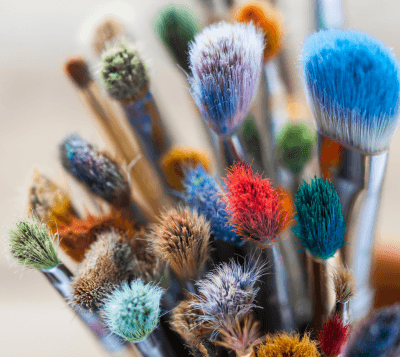 The Rise of the side hustle 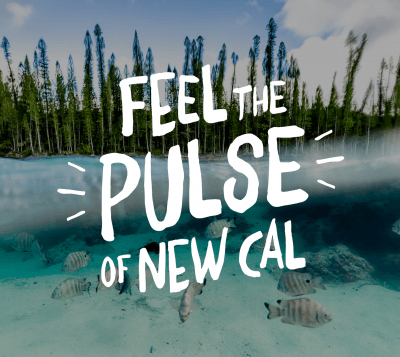